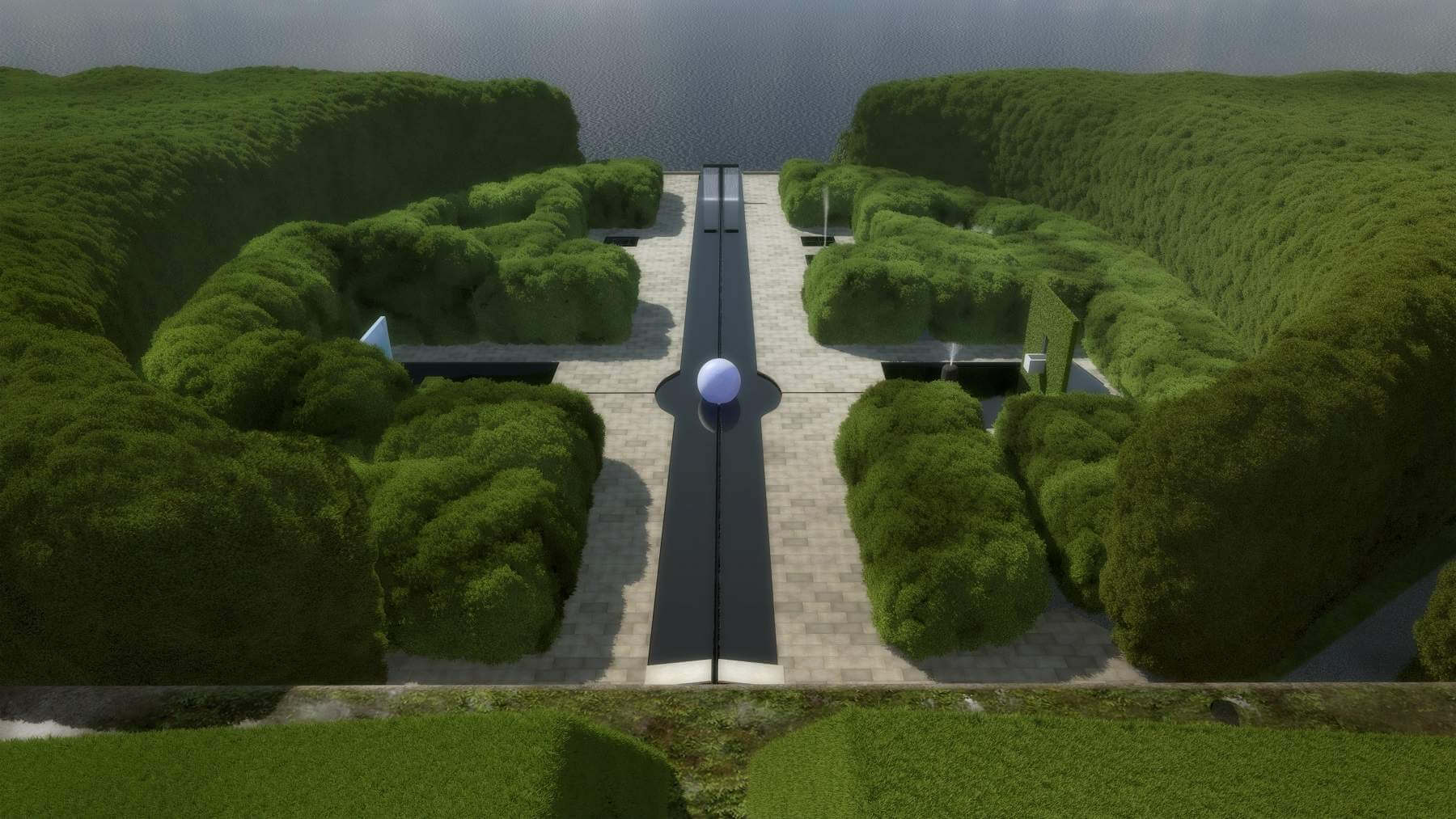 The Garden of Life

A modern sacred garden for the anthropocene era 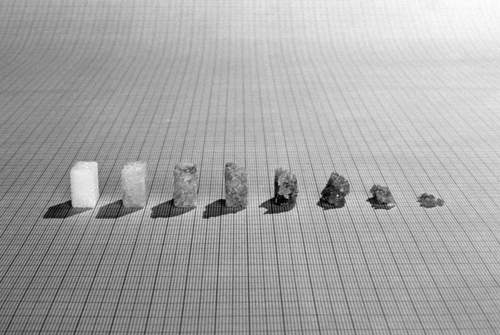 Decomposition, 1970
In 1975, when I embarked on the first sculpture projects that are now part of The Garden of Life, I already had in mind that they should be elements in a garden. The garden had become a neglected art form in the twentieth century. My conviction that a new, ecologically conscious age needed a revitalised garden culture to give artistic expression to its aspirations was half-conscious in the beginning, but has only strengthened over the years. The Garden of Life is my response to that conviction. I started my artistic career in 1969 doing proposals for ecological protest monuments, partly inspired by Claes Oldenburg, from whom, as students, we commissioned his first built monument, Lipstick (Ascending) on Caterpillar Tracks and gave it as a surprise gift to Yale University. A protest against the Vietnam War and a conservative society, it turned out to be one of the major cultural-political art events of the late 1960s in the USA. I went on to work with ice on a frozen bay in Finland while living there in the early 1970s, and then with plant material and later water and ice when I was back in the United States from 1975 on. The projects were done over a long period due to the exigencies of earning a living. Since moving back to Finland in 2003, I have been able to devote myself more fully to my own projects. 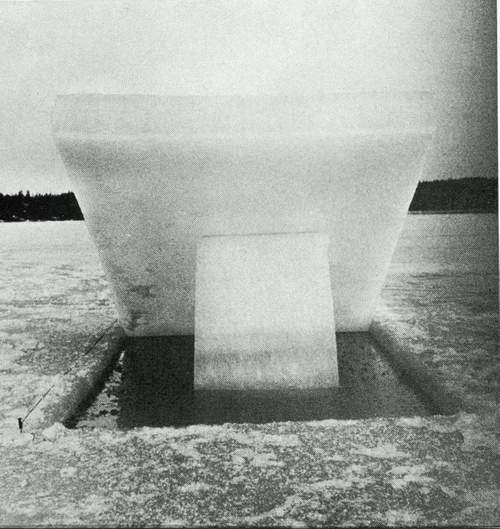 Exit, 1972
The Garden of Life has had a long gestation period. Thirty-five years passed from the time of the first projects in 1975 until the final concept took form in 2010. Sixteen of my works, done intermittently over those years, form the elements of the garden. Despite the diverse media and materials and the long timeframe, there was both a unifying aesthetic and something I only realised later, a unifying theme. The works – in water, ice, grass, etc., minimal and archetypal – were, each in their way, metaphors for life. Some had references to the cosmos or to nature, some to human nature, but both symbolically and formally, they fit together. When one day I came upon a drawing of the human brain, the concept of the garden fell into place. The brain is where we conjure up our symbols and metaphors of life, and so it seemed appropriate that the form of this garden symbolically evokes the human brain. 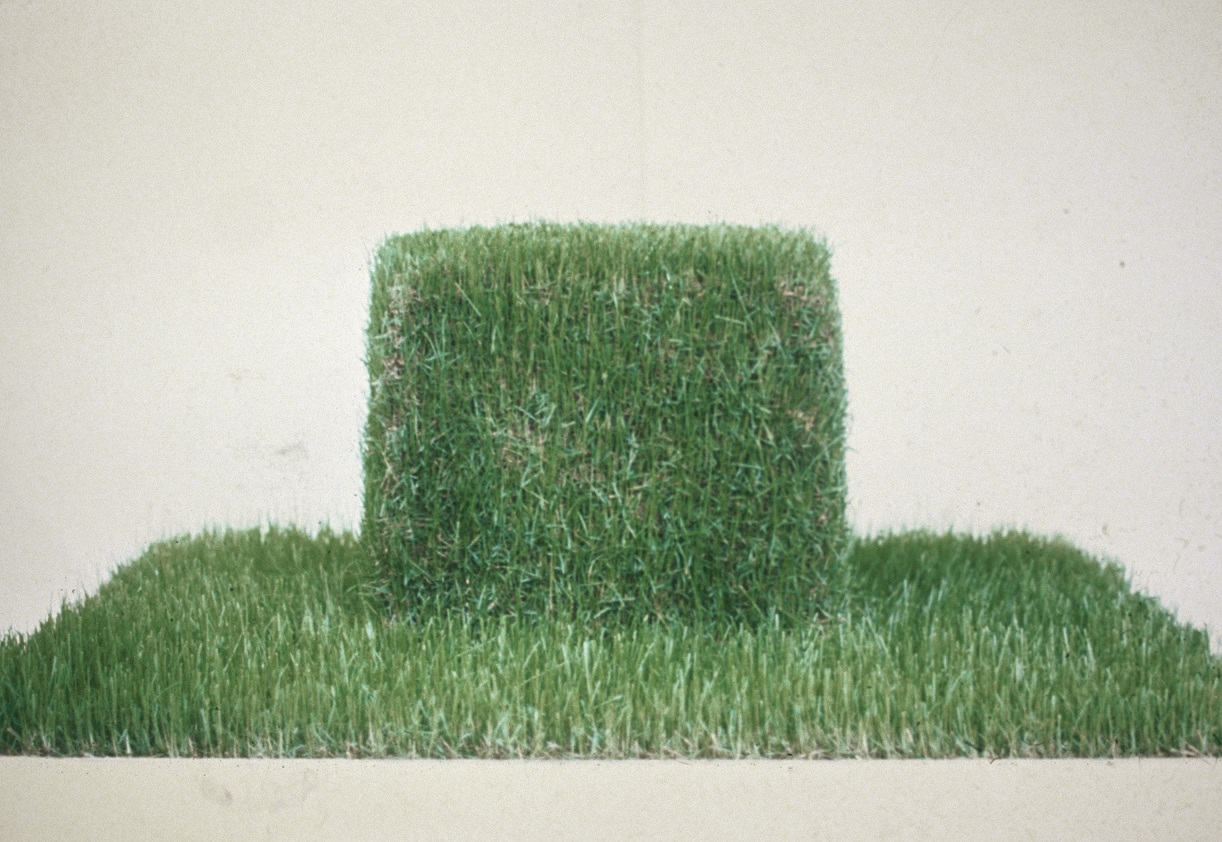 Et in Arcadia Ego, 1976
My sources of inspiration have been the whole of garden history, landscape archetypes, artists from Poussin to Friedrich, and architects such as Asplund, Baragan, Kahn, Lewerentz, Loos and Scarpa. In contrast to many modernists, who hoped to reinvent art, architecture and the garden from zero, I have sought to build on past models, yet transform and revitalise them to give new meaning to the parts and the whole. In my work, I have tried to create simple archetypal symbols that can be intuitively felt and freely interpreted by the observer. They may have cultural and art historical references, but such knowledge is not required to appreciate them.

The Garden covers slightly less than one hectare. Its shape and its plant material suggest a symbolic brain. The brain, like much in nature, has a natural symmetry. To tie the garden into the larger cosmic cycle, I have emphasised the central axis, orienting it east and west, to sunrise and sunset. At the eastern end, a low rock escarpment is topped by an earthen mound with a V cut into it to reveal the rising sun. To the west, the garden overlooks the sea for an unobstructed view of the sunset. 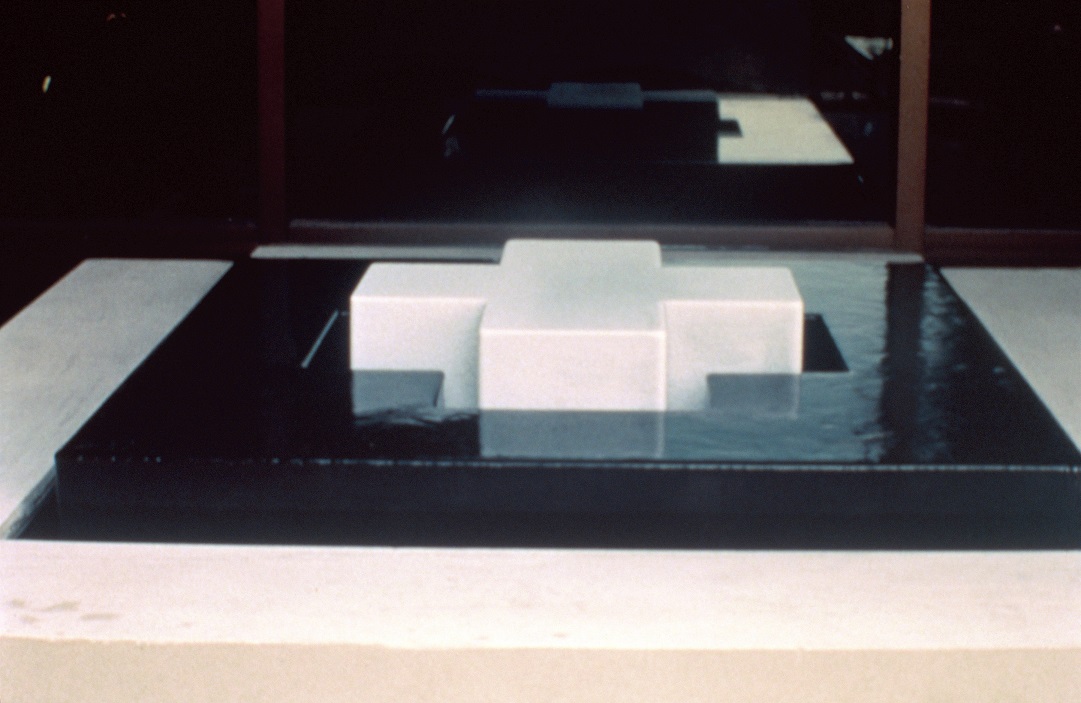 Below Zero, 1996
In addition to the sun, chronometer of our daily existence and our source of energy and light, water, that essential element of our being, nourishing and sensual, dominates the central axis. Throughout history, fountains and water gardens have been playful and light and occasionally contemplative. But water has a broader emotional range, evoking mystery and the unfathomable, the erotic as well as fear and death. I wanted the garden to evoke the full range of emotions that water can inspire. The central reflecting pool in the garden, a metaphoric river, flows ambiguously in three directions. To the west to the open sea, to the east (like the river Styx) into the bowels of the earth, and all along its course, over double dams, in on itself. The plant material of the garden, a kind of poché in which the projects are embedded, seeks to mimic the dense organic coils of the brain. Narrow paths wind through the vegetation. (The exact species of plant material used would depend on the eventual geographic location of the garden and its particular microclimate). More open stone paved areas surround the various sculpture projects. The garden itself is surrounded on either side by a taller forest. A tree-shaded arrival avenue takes you diagonally through the forest to the base of the granite escarpment. Set into the rock to the left, a round domed cave contains the first sculpture Ur Monument. Covered in ice(1), the piece is both a sentinel and a latent fertility symbol(2). Next you arrive at the central axis of the garden, the symbolic river. To your left is the cave into which the river flows, and at its back a smaller opening into which the river continues into the earth. Hanging in the back of the cave, as if floating in space, is an ice-covered sphere, the sculpture In the Beginning.
To your right in the distance, emerging out of the middle of the river, is the sculpture Birth, a cross between a sphere and an egg in frosty cast glass. It was inspired by the first verse of the Kalevala, which tells of the creation of the world.

At Birth, a major cross axis occurs. To your right, set in its own square reflecting pool is the Romeo and Juliette fountain. It consists of a planar 7 x 7 metre wall covered in ivy. A small white marble balcony, served by steps from the back, overlooks the reflecting pool and a cylindrical rock spouting a fountain from its top. 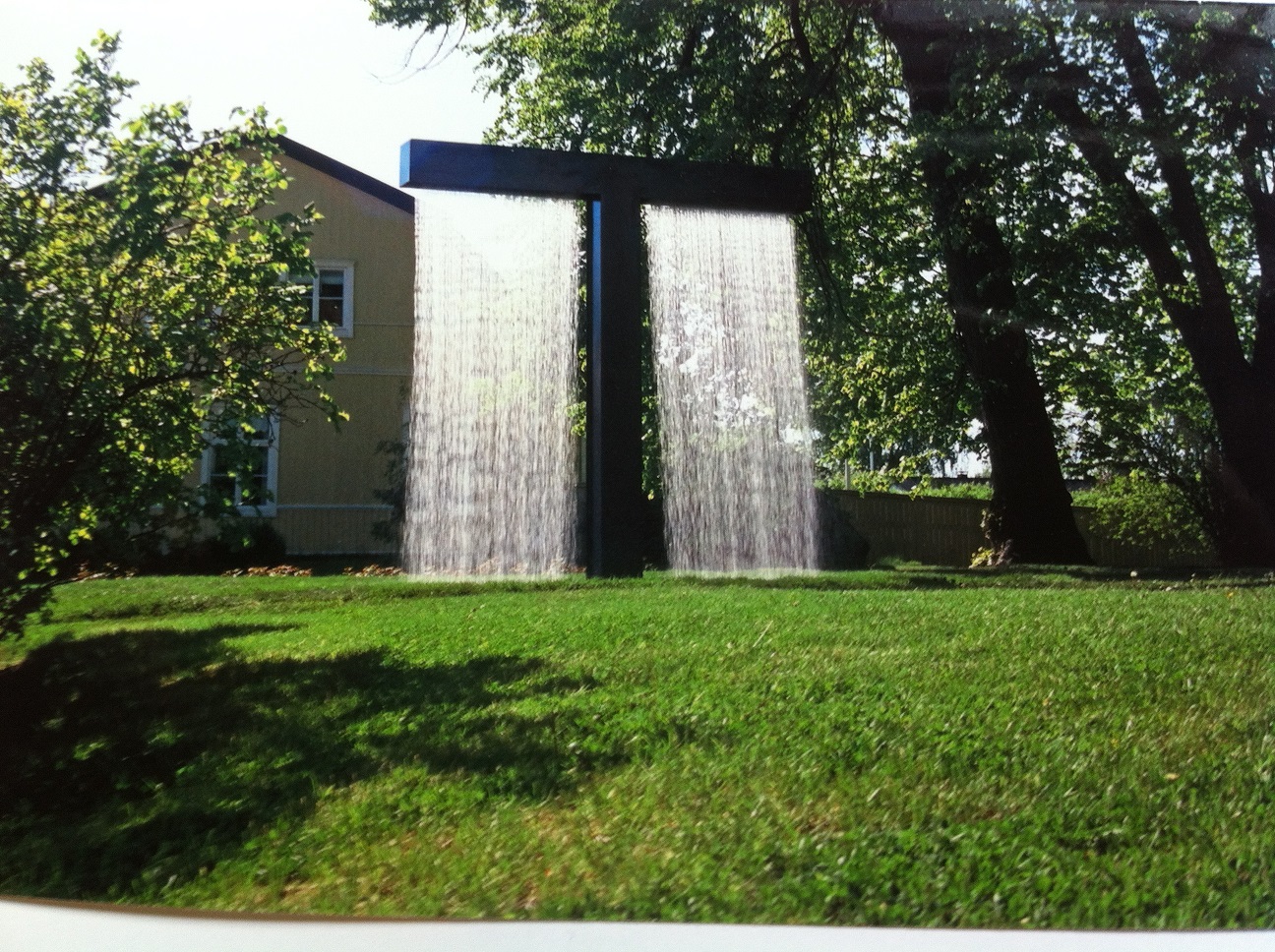 The Tree of Life, 2009
To the left of Birth, a freestanding wall of ice, 3 metres high and 9 metres long, also sits at the back of its own reflecting pool. Behind it and to its sides, it is surrounded by a considerably taller hedge of trees to protect it from the rays of the sun. The wall of ice serves as the backdrop to the sculpture Et in Arcadia Ego a small square island in the middle of the reflecting pool with a cube in its centre. Grass covers both the island and the cube seamlessly. The piece borrows its name from a painting by Poussin of a blocklike grave in a beautiful Arcadian landscape. Further along the main axis are six smaller square pools, three on either side of the river. Like the dichotomy of the brain into left and right sides, they represent dichotomies. The three on the left are closed forms. The central pool has a circle chasm in the middle into which the water cascades. The two side pools have the circle and the square carved into them via double dams. On the right, the pools are open forms. The middle pool has a column of water vapour rising out of its centre and diffusing into the sky. The two side pools represent the spiral and the crossing, also carved into the water via double dams. Two major water sculptures embedded in the vegetative brain on opposite sides of the river axis symbolise another dichotomy. On the left is Plus and Minus. A plus sign rises above the surface of a rectangular pool. Water pours out of its top over the sides. Adjacent is the minus sign, a slit in the surface of the pool into which the surplus water disappears. 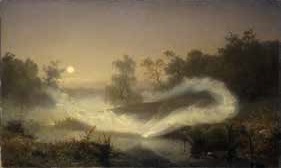 August Malmström's
Älvalek, 1866
On the right side of the river axis, also embedded in the vegetation, is The Dance of Life fountain. Jets of water of approximately human height spout in a circle, rising out of a low-lying spray of water mist. Moving nozzles make the jets of water dance, giving a sense of dancers moving round in a circle. Computers choreograph the whole sequence. It is inspired by Matisse’s Dance and August Malmström’s Älvalek, a well-known 19th century Swedish painting of fairies dancing in the morning mist.

The focal point looking west along the river axis is the sculpture The Tree of Life(3), a 4 metre high T-shape in steel with water cascading like heavy rain out of its outstretched arms. Silhouetted against the sky and the sea beyond, the cascading shower of water is lit up by the rays of the sun. At its western end, the river ends in a waterfall over the stone retaining wall.
At its base, a sloping cascade carries the water the short distance to the sea.
© 2017 STUART WREDE ALL RIGHTS RESERVED. WEB PRODUCTION BY ERIK GUDÉHN